William H. Bruning was a... 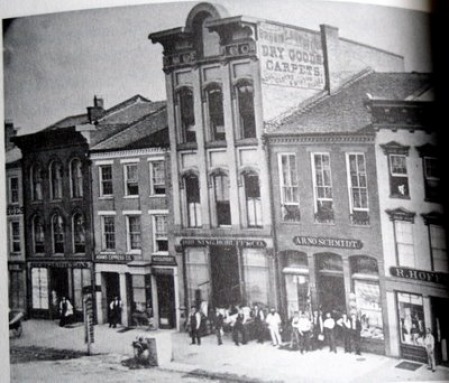 ...quiet but commanding figure.  In 1904 people in Winona Lake Indiana knew him as an influential member of the board of their world famous resort.  They talked of him as a millionaire and gossiped endlessly about his relationship with one Nelle Cooper who lived in Winona. No one understood why the two couldn't marry or move into their lovely mansion named Merbrink.  They had kind thoughts that Nelle wouldn't leave her ailing parents to run a hotel alone.  They pestered the two lovers about their relationship constantly.  However, none of them could possibly have imagined the real circumstances behind their decision.  In fact, the two had been lovers for since 1895 and their courtship spanned several cities as well.  See Nelle's link for details.


William's association with money began early with a fondness for coffee, tea and spices.  His father John brought home-roasted coffee to Indiana in 1852.

Above:  This is J. F. Bruning's original mercantile in Madison Indiana circa 1870 when William was still in his teens. You can probably see his father John, their partner Horuff, his uncle and himself standing in front of the store.  Note the lettering on the top right side of the building at the top and over the front doorway which says Bruning and Horuff Dry Goods.  Photo courtesty of Historic Madison Inc. and John Staicer. It is originally found printed in the book The Early Architecture of Madison Indiana by John T Windle and Robert M Taylor Jr.

This picture is a... 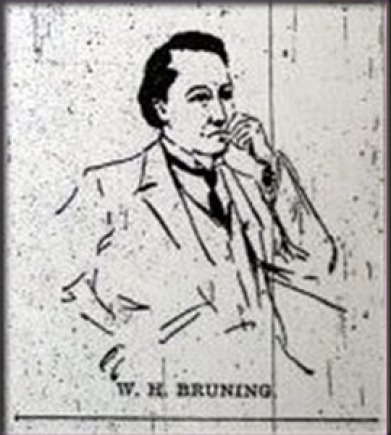 ... woodprint of William H. Bruning in 1895 during the trial of his brother-in-law W. M. Copeland.  The coffee, tea and spice import business brought the family much money but with that money came quarreling.  When his young sister Clara decided to marry a former Indiana congressman with no other job skills, things began to go downhill.  After their father's death in 1891 William was given control of the family company much to the Copeland's displeasure.  They claimed William had unfairly influenced their father and filed several lawsuits which weren't resolved until nearly sixteen years later in 1911. Things became so ugly that in 1894 Copeland  shot Bruning twice - once in the arm and once in the jaw.  Copeland's trial in 1895 held the front page of many papers for three weeks. 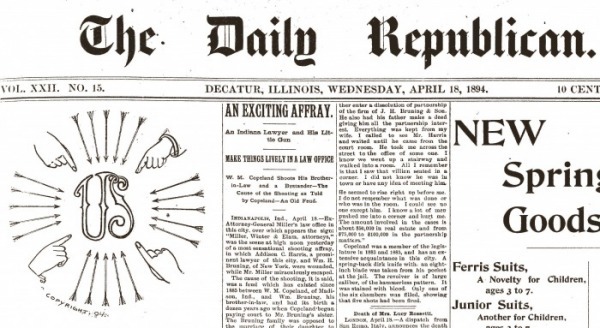 Above:  One of the front page newspaper reports of Copeland shooting William H. Bruning.  The story appeared Wednesday April 18, 1894 in newspapers from The New York Times to The Atlanta Constitution.  Bruning was shot in the jaw and the arm in the Indianapolis law office of former President Benjamin Harrison in view of several people.

Above: Through all of the lawsuits, attempted murders, scandals and secrets, Bruning never stopped inventing things.  He and his father owned several patents for coffee makers including the one pictured above. 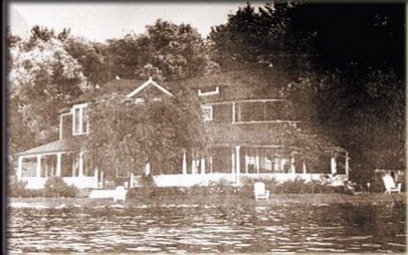 ...finished building this mansion for his bride Nelle in Winona Lake Indiana, the tiny resort where they had fled after the trial to hide from the Copelands. But they did not move into the house for almost twenty years.  Many neighbors claim the house is haunted by Miss Phebe to this day.  The Lost Chloe explains why and how.

Above: In Springdale Cemetery William H. Bruning erected a huge monument to the family in hopes of finally putting to rest the quarrels and making peace.  Here are buried his  Father John and Mother Catherine plus an older sister Caroline who died at age 8, and grandmother Adelaide Von Broke Sur Lage.  Later, after their eventual marriage and her death in 1925, Nelle (also Ellen and Helene - see Nelle's linkfor details) was buried here.  Much later William himself was buried here in 1930 although there is no marker, carving, or headstone to show this.  Only his grudge-bearing sister Clara Copeland was there at his funeral and she never bothered to carve his name in the space on the monument above Ellen's name.  In the The Lost Chloe, the reader will see why his loving daughter Chloe is not present and never finishes this job.