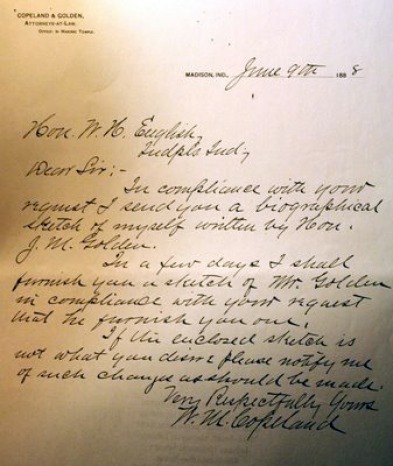 ... in 1859, always eager to get ahead with his mouth.  After being elected twice as the Indiana congressman from Madison Indiana, he met and married Clara Bruning much to her parent's and brother's disapproval.  They viewed him as without business acumen but adept at quarreling.  The two married anyway, though the pair were forced to live with her parents for a decade because they had no income of their own.  Father John Bruning wanted Copeland kept far away from the family money in the Bruning and Sons Coffee, Tea, and Spice Company.

Left: Handwritten Copy of W.M. Copeland's request to W. English regarding his Autobiography in 1888 Indianapolis. 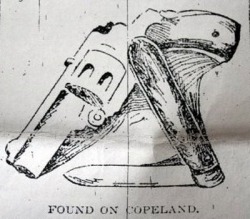 When Father John died in 1891 leaving Clara's brother William in charge of the family assets and business, Clara threw a fit.  She and Copeland began filing multiple lawsuits and refused to move out of the family home in Madison.  Things came to a head in 1894 when Clara told her husband of an old family scandal and he went to Indianapolis and tried to murder William.  These two woodprints are from the April 18, 1895 Indianapolis Sentinel newspaper which headlined the scandal for three weeks. The story made it around the nation even being featured in the New York Times.

Right: The gun and knife belonged to W. M. Copeland's and were used to shoot William H. Bruning in the mouth and arm.